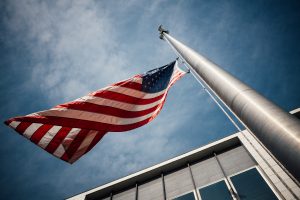 I have been teaching in my position for almost 11 years, and in that time I and my string colleagues have been called upon with increasing frequency to provide music for Flag Day festivities at our various schools. In the past I have relied on Soon Hee Newbold’s Honor and Glory, which is wonderful, but not as  recognizably patriotic as more traditional tunes; an arrangement of America the Beautiful that I did for combined beginning strings and beginning band which is a logistical nightmare; and my own arrangement of Rally ‘Round the Flag, which is really too difficult for most second-year groups.

I was looking for other options and the arrangements I found were either too difficult for my beginning students or arranged to be so easy that the tune was barely recognizable.  So after some conversations with some of my colleagues, I set to work a couple of summers ago to arrange a collection of patriotic pieces for use in Flag Day ceremonies.  My goals were for the arrangements be brief for placement in a ceremonial setting, as true as possible to the original melodies, and technically within reach for players at the end of their second year (for me that is players that generally have played Minuet 1, 2, and 3 from Suzuki).

The tunes I arranged include America the Beautiful, You’re a Grand Old Flag, The Star Spangled Banner, America (My Country ‘Tis of Thee), and, just in case, Hail to the Chief. I showed them to my colleagues and they seemed to fit the bill; three of us used at least some of the pieces in our flag day ceremonies last June.

I am very pleased to announce that Kendor has accepted this collection, dubbed Flag Day Survival Kit, for publication, minus Hail to the Chief, which was eliminated to make the collection more compact.  I do hope that this proves a useful addition to the libraries of elementary string teachers in the U.S.A.  Kendor will initially offer the piece in October 2017 and then promote it in their spring 2018 catalog.

You can listen to draft recordings below:

America (My Country ‘Tis of Thee)

This was a unique project for me. Usually I begin a composition with some kind of a musical idea – this was more of a concept. When I was teaching elementary orchestra, children would often ask, “why don’t we play (insert name of popular tune)”? I am not a fan of...

END_OF_DOCUMENT_TOKEN_TO_BE_REPLACED

Hero's Quest is my latest Kendor release, commissioned in 2015 by the 8th grade orchestra of Willink Middle School in Webster, NY. The group's director, Kathleen Biscaro, asked for a piece that was in 6/8 time that had challenging parts for all sections and a limited...

END_OF_DOCUMENT_TOKEN_TO_BE_REPLACED

This may just be the perfect vehicle to allow your viola section to express their bottled-up rage.  Let them show the violins who's boss with Viola Rampage! For those of you who have performed this piece before, this is a newly revised, slightly more difficult...

END_OF_DOCUMENT_TOKEN_TO_BE_REPLACED

Please contact me with a few details if you are interested in commissioning a work or scheduling a visit.

Explore Possibilities
We use cookies on our website to give you the most relevant experience by remembering your preferences and repeat visits. By clicking “Accept”, you consent to the use of ALL the cookies.
.
Cookie SettingsAccept
Manage consent

This website uses cookies to improve your experience while you navigate through the website. Out of these, the cookies that are categorized as necessary are stored on your browser as they are essential for the working of basic functionalities of the website. We also use third-party cookies that help us analyze and understand how you use this website. These cookies will be stored in your browser only with your consent. You also have the option to opt-out of these cookies. But opting out of some of these cookies may affect your browsing experience.
Necessary Always Enabled
Necessary cookies are absolutely essential for the website to function properly. These cookies ensure basic functionalities and security features of the website, anonymously.
Functional
Functional cookies help to perform certain functionalities like sharing the content of the website on social media platforms, collect feedbacks, and other third-party features.
Performance
Performance cookies are used to understand and analyze the key performance indexes of the website which helps in delivering a better user experience for the visitors.
Analytics
Analytical cookies are used to understand how visitors interact with the website. These cookies help provide information on metrics the number of visitors, bounce rate, traffic source, etc.
Advertisement
Advertisement cookies are used to provide visitors with relevant ads and marketing campaigns. These cookies track visitors across websites and collect information to provide customized ads.
Others
Other uncategorized cookies are those that are being analyzed and have not been classified into a category as yet.
SAVE & ACCEPT
Powered by